In the middle of June (14-15) 2018 Bucharest has become a place for the key players of European gas sector to come and meet. Within the framework of 16th Gas Infrastructure Europe Annual Conference the attendances learned about how the European gas infrastructure will look like beyond 2050, how the most important actors of European gas industry see the future energy mix in their businesses and how the renewables will change the future energy mix in Europe.

As it’s Prof. Dr. Klaus-Dieter Borchardt, Director on Internal Market in European Commission’s DG Energy mentioned the natural gas industry in the EU is undergoing a period of substantial uncertainty regarding it’s future role in the energy balance of the European Union. The transition to a low carbon economy involves substantial changes along with the entire gas value chain in order to move towards decarbonisation, energy efficiency and full integration of the European energy market, provision of security in energy supply for all the EU members.

As Dr. Borchardt highlighted, subsequently, we move at the Gas Commodity Markets, where the traditional use of natural gas (electricity generation and heat) will coexist with use of other gas forms (LNG/CNG) in the transportation sector and renewable gases (or green gases) that can substitute natural gas such as biomethane or hydrogen. 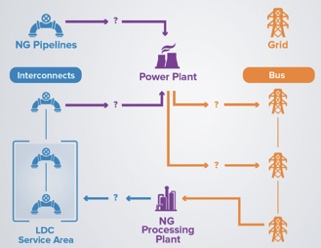 In the meantime, the perception of the future of gas in the European energy mix is changing. In European Commission’s DG Energy seriously consider hybrid energy infrastructure building on both electricity and gas generations as more efficient, resilient, sustainable as well as cheaper than an all-electric energy system for Europe. There is now a large majority believing that gas can play a significant role in the decarbonisation process: Gas is the ideal back-up technology for variable renewables characterized by a high flexibility for balancing the integration of renewable generation (more flexible compared to nuclear production); and by the lowest CO2-intensity of fossil fuels. In addition, natural gas has to win the economic competition against coal. Winning that competition would secure the use of natural gas in the short to mid-term as a “bridging fuel” for the development of renewables until 2035. By Dr. Klaus-Dieter Borchardt, transition to an “all-electric world” is neither technically feasible, nor economically efficient and acceptable to consumers and the broader energy public. Furthermore, it is impossible to give up gas infrastructure which is well developed in large parts of Europe and has a remaining lifetime far beyond 2050. The gas assets built in Europe worth billions of Euros. Nevertheless, the answer about the long term future of gas in the EU depends on whether we manage to decarbonize natural gas and develop renewable gases.

As Dr. Klaus-Dieter Borchardt mentioned, “Power to Gas” we need for the development of renewable gases. This is a technology for the production of renewable hydrogen and methane notably in periods with an abundant supply of wind and solar power. It is also the link between the power and the gas infrastructure. It might be the most promising technology for integrating the different energy related sectors of transport, heat production, power generation (so called sector coupling) and carbon capture and storage technologies.

Power to Gas appears to be the all-in-one solution addressing the crucial problems of the European Energy system. Surplus power from wind and photovoltaic can be transformed by electrolysis intro hydrogen and then methane, which can be fed into the gas grid and into existing gas storages. Hydrogen can be produced in a simpler way than methane but methane can be better integrated into the gas grid (without any restrictions).

If to speak about regulatory system for European integrated gas market, it was developed in 2010-2016 and now the rules are working at the gas market quite well. As a further step of improvement of functionality of integrated gas market in the EU, DG Energy considered to push the tariffs to the entry borders of the EU. But, such system would require to establish  an EU inter-TSO compensation scheme at EU level and this is, at this moment, look impossible. Instead, EC consider to set a harmonised framework to foster cooperation among TSO and more efficient planning of network use and its operation for the benefit of the final customers.

It is also worth mentioning that after years of gas market dominance in Central and Eastern Europe (CEE), the energy relationship between primary gas supplier Gazprom and the CEE countries have been gradually equalized thanks to market liberalization and gas infrastructure integration in the EU. Greater gas trade at energy hubs and diversification of gas supply to LNG and Caspian gas have exposed Gazprom to competition, forcing it to adjust its pricing mechanisms and revise its export strategy to maintain market share in Europe. As a result Russian gas at European gas market became the cheapest option for consumer market players.

The adoption of the Third Energy Package in 2009 radically reshaped the European gas market and shortened the abilities of Gazprom to speculate with its dominant gas supplier role in Europe. In 2011 to lunch a constructive dialogue and to reflect on the key gas issues important for both parties, the European Commission and Russia have established a joined Gas Advisory Council (GAC) laying out a series of intensive workshops that served as the basis for developing an EU-Russia gas cooperation roadmap until 2050. They started discussion how the new evolving EU paradigm “renewable electricity and decarbonized gas” can be developed for the mutual interests of the two, since both parties are bound together by gas interdependence as primary consumer and supplier of gas.

Been deeply affected with dependence on exporting energy resources to Europe, Russia regularly “tests the water” for possible new energy initiatives that huge infrastructure projects like the South Stream, Nord Stream 2 or Turk Stream 2. They are planned or implemented without coordinating or discussing with European Commission. And those huge projects can potentially have an influence on the European energy markets. Such line of behavior creates mistrust on both sides which is not a good basis for a trustworthy relationship.

Moreover, in Brussels believe that Nord Stream 2 project consists a substantial risk for European supply security, as well as the integrity and coherence of the European Union.

It is quite easy to recognize that removing gas flows from the Ukrainian Brotherhood pipeline network will likely result in its significant degradation. Its current maximum carrying capacity makes around 140 bcm; with much smaller gas-transit flows, much of the network will no longer be able to be maintained, and will quickly degrade. Once gas-transit flows to Ukraine are lost, it will be difficult to resurrect them, leaving the EU with a significantly more concentrated and controlled by single gas exporter delivery system.

After Brotherhood route diversity will be restricted the concentration of transported gas on Nord Stream will significantly increase a supply-security risk. This risk was illustrated by the September 2017 maintenance work on Nord Stream 1, which took place over two weeks. As the Brotherhood pipeline network remained operational, gas flows could be increased via Brotherhood to maintain supply into Germany and other European countries.

No doubts that Nord Stream 2 is a commercial project for Germany which become a hub for the importation of Russian gas into the EU, its market will obtain a much greater degree of liquidity, and, as a consequence, gas prices will be lower. But it’s no doubt as well that supply security risks will pay other members of the EU and first of all the states of Central and Eastern Europe.

When we try to evaluate the term that Nord Stream 2 is a Commercial Project, the first thing that comes to mind why any energy company would seek to build an entirely new transmission pipeline to deliver the same gas to its customers when one already exists. However, Gazprom is proposing to spend €9.8 billion on building an entirely new pipeline, to provide an alternative supply route. Furthermore, this price tag only includes the cost of the 1,200-kilometer pipeline from the Russian Baltic coast, through the Baltic Sea to Greifswald on the German Baltic coast. It does not include the cost of the 3,100-kilometer overland pipeline from the gas fields on the Yamal Peninsula to the Russian entry point of Nord Stream 2 and many other unspecified expenses. If commercial interests of participants in project are unclear we came to political or geopolitical interests.