Consequently, the global supply of LNG will increase to almost 793 million tons per year (or about 1 trillion 94 billion cubic meters of gas) at the end of 2025, and will constitute one third of global total gas consumption in the world. On the basis of the long-term estimates of the Oxford Institute for Energy Research, global LNG production will increase by about 138 billion cubic meters every 5 years after 2025.

J. Stern notes that, geographically remote from the consumer market, LNG producers from Canada, Africa and Australia are focused on large-scale LNG projects (from 2.5 to 20 million tons of  LNG per year), while in the US, the power of the overwhelming majority of LNG projects amounts to 0.25 – 2.0 million tons of LNG per year. Modular technologies are used in their construction, which allows to significantly reduce the time and cost of implementing each new LNG project.

The expert believes that each LNG project is unique in terms of geography, geology and conditions for the formation of the price of liquefied gas for the end user. However, on average, according to the calculations of the Oxford Institute for Energy Studies, the price of LNG in the global market, which is currently within USD 6.5-8.5 per mmBtu or USD 230-300 per thousand cubic meters, consists of:  cost of gas extraction – by 23.5%; costs for gas transportation to the LNG terminal – by 5.88%; costs of gas liquefaction – by 41.18%;cost of transporting LNG to the consumer market – by 11.76%; and the net profit of LNG producers, as a rule, does not exceed 17.64%.

Taking into account the above-mentioned factors, the formation of the price and characteristics of the new LNG projects planned for the period up to 2025, the experts of the Oxford Institute of Energy Research gas program built a forecast (two scenarios) of formulation of a proposal for liquefied gas and the competitive advantages of LNG producers in the European gas market as of 2025.

« Figure 1. Projection of LNG prices in the EU gas market in 2025 (two scenarios: high price - USD 7.5 per mmBtu and low price - USD 6.0 per mmBtu) and calculation of the price of LNG producers in new projects planned for implementation in 2019-2020 » 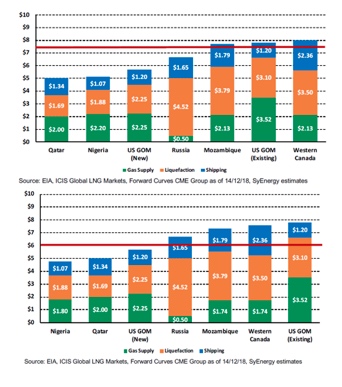 According to J. Stern, the introduction of technological innovations in natural gas extraction and the implementation of new LNG projects in the medium term will allow the US to significantly reduce the cost of LNG (Figure 1), which will allow American manufacturers to increase their competitiveness both in the Asian gas market, as well as in the Nordic gas market, where the projected LNG in 2025 will be within  USD 6 – 7.5. per mmBtu or USD 212 – 265 per thousand cubic meters.

According to the Oxford Institute for Energy Studies, new LNG projects in the United States will allow to provide gas at the EU market at around USD 200 per thousand cubic meters. Such proposals, according to J. Stern, will be competitive in the EU in both scenarios (high \ low LNG prices in the EU) and, even in comparison with Russian pipeline gas. As regards the Russian factor in the EU gas market, J. Stern noted that, according to the GECF Annual Statistical Bulletin 2018 (Table 3.1.1 Gas Proven Reserves of GECF Countries), the proven gas reserves in the Russian Federation at the end of 2017 amounted to 47.8 trillion cubic metres (or about 24% of proven gas reserves in the world). The average cost of gas extraction in the Russian Federation, including all lease payments, is relatively low and equals about USD 35.38 per thousand cubic meters. Since 2013, the Russian Federation has introduced a zero rate of customs payments for the export of liquefied gas. The Russian government announced plans to further introduce a zero rate on rental payments, a zero corporate tax rate and a profit tax rate of 13.5% for 12 years for “Arctic LNG 2”, “Yamal LNG”, “Baltic LNG” and “Sakhalin II” LNG projects. However, technologies used in Russia do not allow Russian LNG projects to substantially reduce the cost of producing liquefied gas, which remains at USD 160 per thousand cubic meters (or USD 4.5 per mmBtu).