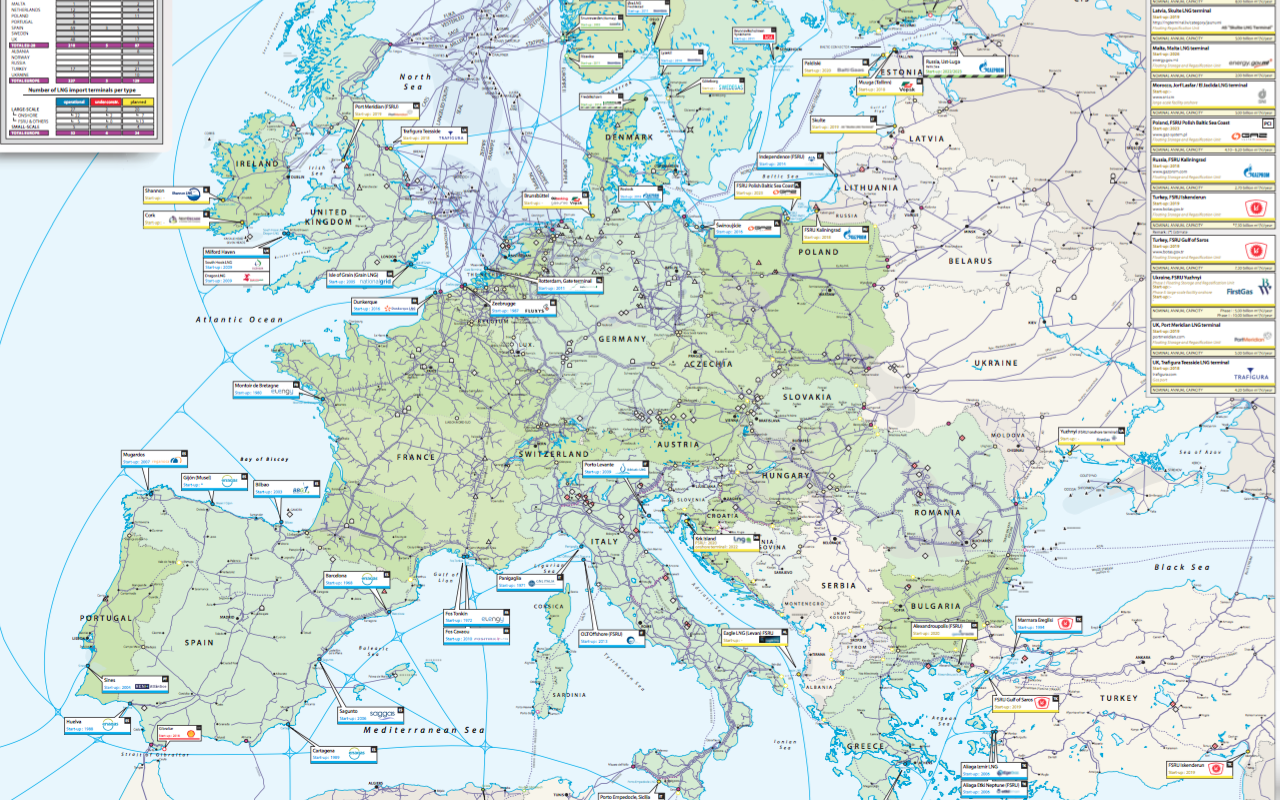 The European Gas Conference on Promoting a Dialogue between the EU and its leading Gas Suppliers, organized by the Austrian Oil and Gas Company “OMV”, was held in Vienna, Austria on January 28-30, 2019. The event was attended by representatives of the European Commission, experts from more than 200 world energy companies and government representatives of gas producing countries. The major themes of the conference were: discussion of new alternatives to the diversification of gas supplies to the European energy market; the development of liquefied gas in the EU, the development of the Southern Gas Corridor and import of pipeline gas from Azerbaijan into the EU; the impact of events in North Africa, the Middle East and extraction of shale gas in the United States on the formation of the European gas market, etc.

According to the expert, the deterrent effect of such a scenario is that the price of liquefied gas in the EU remains more expensive than the price of pipeline gas from Russia, North Africa or Norway on a contract basis. As a result, the actual level of operation of LNG terminals in the EU in 2018 did not exceed 17 – 20%.

Thus, in January 2019, at the most liquid Dutch TTF gas hub, the LNG price was EUR 20.18 / MWh (or USD 244 per thousand cubic meters). According to J. Stern, exactly the high price of liquefied gas constrains the massive shift of European coal companies from the use of liquefied gas. In addition, tariffs on gas storage in underground gas storage facilities in the EU are also high, which further limits the growth of LNG imports. The expert is convinced that for a massive transition of European coal generation to gas, the price of LNG in Europe should fall below EUR 18 / MWh (or USD 217 per thousand cubic meters).

Referring to the International Energy Agency, the IEA, J. Stern noted that natural gas now covers about 24% of the EU’s energy needs. The expert believes that, in the medium term, the share of gas in the energy balance of the EU will grow to 30%. And already in 2040, the gas generation in the EU will increase from the current 270 GW to 390 GW. Thus, gas imports into the EU are expected to grow. Imports of LNG in the EU in 2019 is expected to be  67-70 billion cubic meters. And if the government of the Netherlands decides to stop gas production in the area of the Groningen gas field, the import of LNG to the EU in 2019 may increase to 80-90 billion cubic meters.

Speaking about global trends in the global LNG market, “Wood Mackenzie’s” Vice President, Massimo Di Odoardo, said that in 2018, global LNG production was about 300 million tons (or about 408 billion cubic meters), in 2019 this indicator is expected to increase to 340 million tons of LNG, and in 2020 this figure will increase by 32 million tons of LNG. Speaking about the EU, M. Di Odoardo noted that in 2018, the LNG imports were made by 13 EU countries and their total imports amounted to only 20-21% of the global LNG market.

In the context of importing pipeline gas to the EU, M. Di Odoardo stressed that currently the transit capacity of the Russian Federation to the EU is estimated at 257 billion cubic meters per year. By the end of 2018, Russia’s gas exports to the EU grew to almost 200 billion cubic meters. Thus, “Wood Mackenzie” doubts Russia’s infrastructure capabilities to provide further growth in gas exports to the EU. Massimo Di Odoardo noted that in case of the start of operation of  “Nord Stream 2” and the “Turkish Stream” pipelines, the nominal transit capacity of the Russian Federation towards the EU will increase to about 343 billion cubic meters per year. However, “Wood Mackenzie” is convinced that the real volumes of Russian gas exports to the EU in 2025 will not exceed 235 billion cubic meters per year. The major bottleneck is the Austrian gas hub Baumgarten, which will be involved in the transportation of gas from the “North Stream 2” and the “Turkish Stream” to European consumers. According to M. Di Odoardo, to solve the problem of Baumgarten’s capacity, Germany will be forced to build an additional new gas pipeline towards the countries of north-western Europe.

Regarding the prospects for US LNG exports to the EU, Fred H. Hutchison, Executive Director of the “LNG Allies”, the LNG Exporters Association, said that currently 6 new LNG terminals in the US are in the process of construction, which will export liquefied gas to external markets from the second half of 2020. Most of these products, according to F. Hutchison, will come exactly to the EU. After all, geographically, the EU is the closest market for liquefied natural gas from the US, and transport costs in the European direction are much lower than in other gas markets (in particular, Asian ones). In addition, the EU has already built a developed infrastructure for liquefied natural gas imports, which is currently underloaded by almost 70%.

Currently, according to F. Hutchison, no more than 15% of the LNG produced in the US comes to the EU, most of the US LNG is exported to Mexico and the countries of the Asia-Pacific region where buyers are willing to pay higher gas prices than the EU.

F. Hutchison noted that the US is well aware that in the coming years domestic gas production in the EU will be significantly reduced and EU countries will be forced to import more gas, mainly from the Russian Federation. Realizing that gas is not only economy but also geopolitics, according to F. Hutchison, there is a strong interest in Washington in increasing the export of American gas to the countries of Central and Eastern Europe (Poland, Slovakia, the Baltic states, etc.).

On January 30, 2019, within the framework of the Vienna Gas Conference, the American energy company “ExxonMobil Gas Marketing Europe” and the German company “Uniper” announced terms of  agreement on  implementation of a joint project on the location of  a sea-based LNG terminal in Germany or, in other words, a “FSRU” class vessel, equipped with means of transportation, storage and regasification of liquefied gas. In December 2018, “Uniper” and the Japanese shipping company “Mitsui OSK Line” agreed on financing and leasing conditions for the “FSRU” vessel that will transport LNG from the US to Germany and other LNG importers.

The chairman of “Uniper” commercial department, Keith Martin, said that the capacity of the first LNG terminal in Germany, “Wilhelmshaven FSRU”, would be about 10 billion cubic meters of gas per year. The beginning of the operation of the ship is scheduled for the second half of 2022. K.Martin remarked that “Uniper” had already signed an agreement with the American company “Freeport LNG” to supply 1 million tons of liquefied gas per year to Germany during 2019-2021. The port  of “Wilhelmshaven”, located on the German coast of the North Sea, is the only deep-water port in Germany, which is already equipped with a system of pipelines and storage containers for gas.