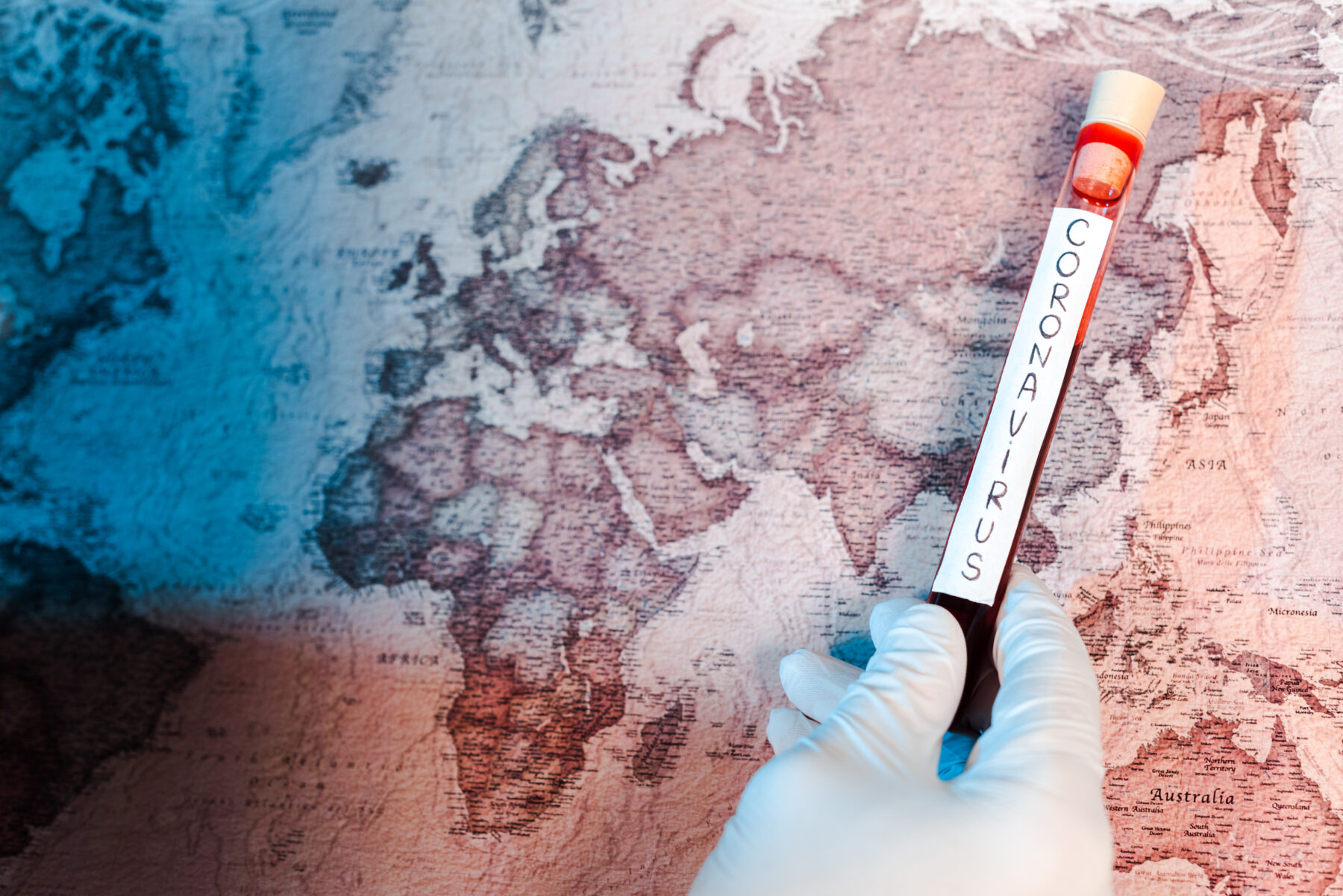 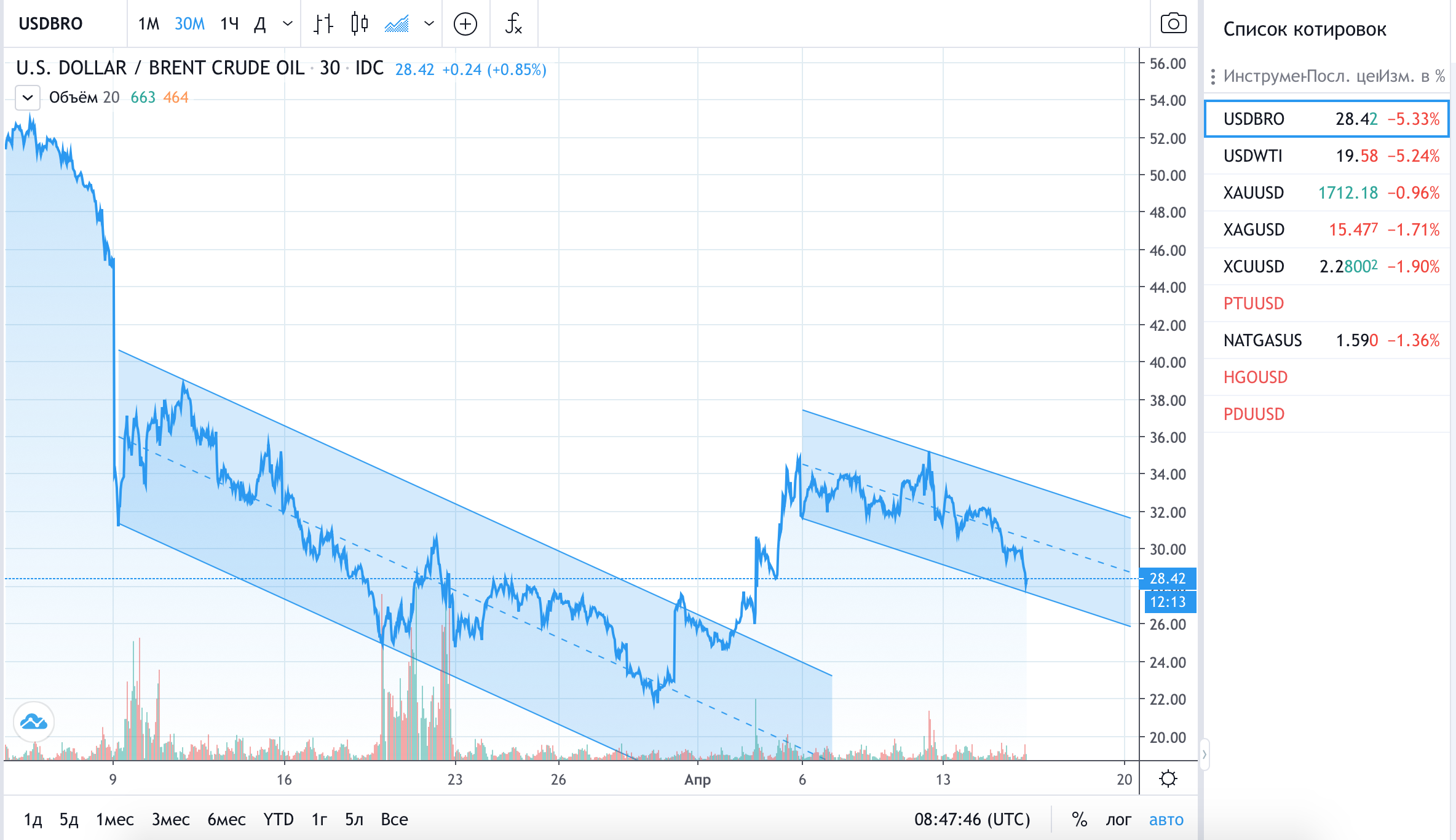 In March – April 2020, there were several almost overlapping events that are extremely important for the Russian economy. The fact that they almost coincided slightly blurs their effect and makes it difficult to analyze the causes and probable implications. However, we will try to consider these events in more detail and understand their significance.

The first event is the onset of the next cyclical crisis. As mentioned in the previous article (“Russia, where are you rushing off to?”– Cepconsult note), Juglar’s medium-term economic cycle implies the emergence of a regular crisis or recession every 7-12 years. For the Russian / Soviet economy, serious crises occurred in 1986-87, 1997-98 and 2008. By 2020, another crisis should have been expected (the Russian crisis of 2015 falls out of this series as it was of local nature and was caused by the problems of the Russian economy rather than the world economy).

However, the crisis can fester for a long time, but takes place once triggered with a kind of strong negative factor that leads to a sequence of events that directly disrupt economic activity. The role of this trigger was perfectly fulfilled by an ongoing pandemic of coronavirus disease. The pandemic was an international problem, was vividly covered by the media and occurred almost simultaneously in the EU and the US. It is noteworthy that no one has learned from the experience of China, where the disease began first. 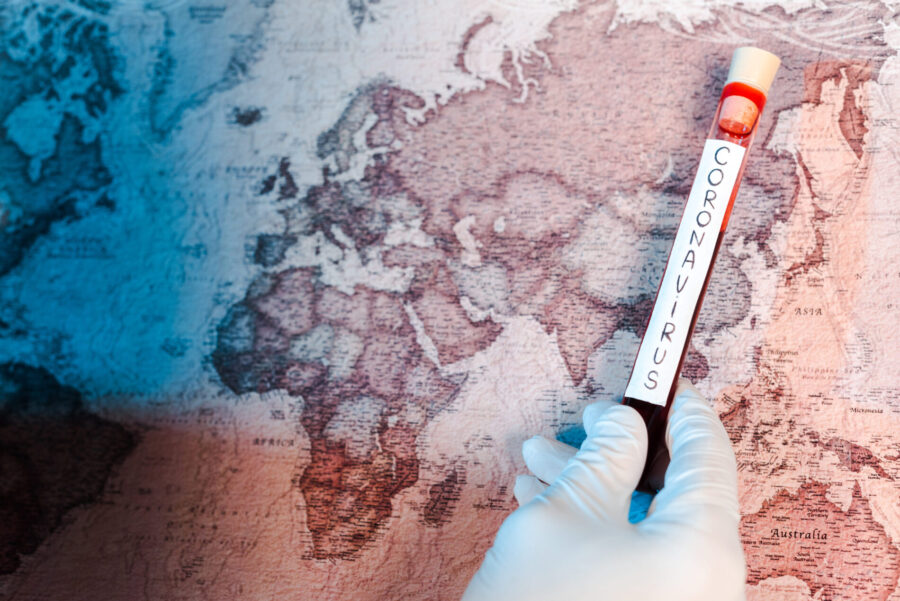 The main factor that hit the Russian economy was the collapse in the demand for oil, as a consequence of the decline in economic activity in the face of severe quarantine measures. This has caused the strongest imbalance of supply and demand in the oil market in the history of observations. Its size is so large that even estimates of its magnitude vary greatly (from 18 to 30 million barrels per day, mbpd). But even the figure of 18 mbpd is very large.

On a separate note, there was an opposition of the Russian Federation and the Kingdom of Saudi Arabia (KSA), which arose in early March 2020 due to the refusal of the Russian Federation to extend the OPEC+ deal. This event was widely discussed in the media (extremely negative assessments of Russia’s actions by Leonid Fedun, the top manager of the largest Russian private oil company “Lukoil”  is worth noting).

In response to refusal to extend the deal, Saudi Aramco began to aggressively compete for European and Asian markets with Russian oil companies, offering a large (up to USD 8 per barrel) discount to Russian oil buyers. This caused the price of Urals oil to fall to the price level of 1999. At the end of March 2020, Russian oil was sold at USD 13 per barrel on the spot market of Northwestern Europe.

As a result of the above processes, since the beginning of 2020, the Russian ruble has fallen from 60 to 80 rubles per US dollar, some large Russian banks have faced an outflow of deposits (not critical, but very unpleasant), and the Central Bank of the Russian Federation began to sell currency from international reserves to support the ruble and the federal budget (so far in limited amounts).

Some experts and government officials have openly panicked that if the price for the Urals remains below USD 20 for several years, this threatens the destructive processes of the early 1990s to take place. Calls to restore the OPEC+ deal at any costs were increasingly made, even if it required big concessions and, finally, it happened. 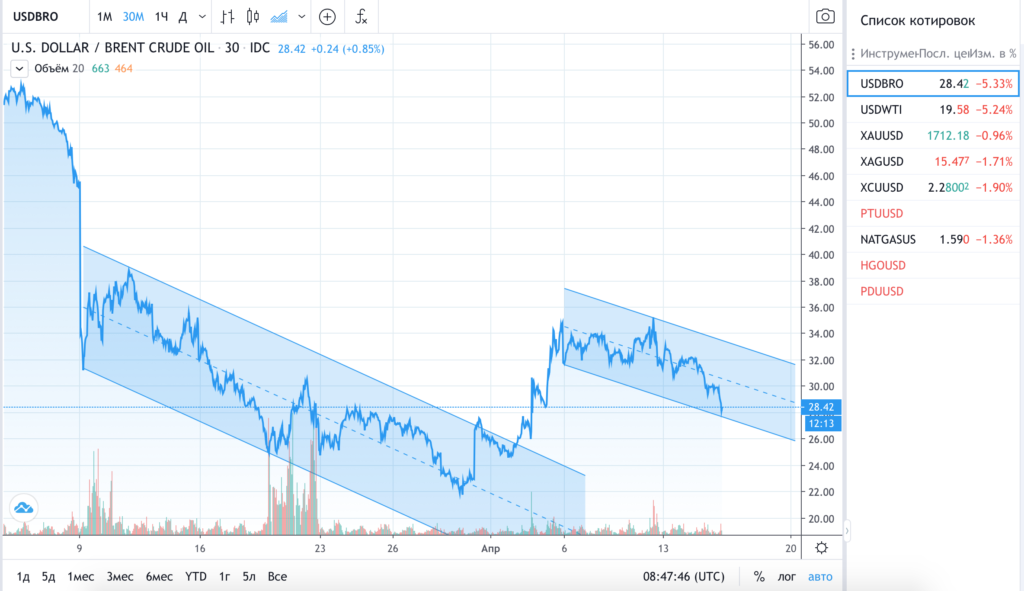 However, all the plans of the oil industry experts have been interfered with the collapse in demand for oil because of the quarantine introduced against the pandemic of the coronavirus. The collapse is so large that it made fervid opponents (the Russian Federation and the KSA) negotiate and even engaged countries whose legislation explicitly prohibits cartel transactions (the US has taken part in the process as consultants).

The scale of what is happening becomes clear when comparing the current imbalance of supply and demand with that observed in the past. Thus, in 1985-1986, the excess supply, which was formed due to the failure of the KSA to unilaterally reduce production, amounted to about 3-3.5 mbpd (4% of the market at that time). This caused about 4 times collapse of prices and a devastating impact on the economy of the USSR.

In late 2014 – early 2015, the market also formed an excess of oil at 3 – 3.5 mbpd (about 3-3.5%). And the price dropped about 4 times again. We can summarize that an imbalance of 3-4% causes about four times price movement. This is due to the inelasticity of the oil market over a short period of time, when consumers cannot dramatically reduce or increase consumption and it is technically difficult for many producers to substantially increase (or reduce) production. The latter is especially relevant for Russia.

The collapse of demand in March-April 2020 amounted to a monstrous value – over 20% of the world’s oil market! There has been no such scale of disaster throughout the history of the industry. There is nothing to compare with. After a series of mutual rebukes (the MFA of the KSA even made a special statement), all the major oil producers humbled their pride and sat down at the negotiating table. Through very difficult and dramatic negotiations (intractability was demonstrated by Mexico), it was possible to reach an agreement to reduce production by 9.7 mbpd in May-June, 8 mbpd in July-December 2020 and 6 mbpd by May 1, 2021.

The agreement looks rather rough for Russia, which will have to reduce production by 2.5 mbpd. This corresponds to about a half of Russian oil exports. The figure is very large, both in terms of loss of the federal budget and in terms of the technical capabilities of the national oil industry.

The complexity arises from a large number of wells (up to 16,000 of the total of 180,000 – Cepconsult note) that will need to be closed by Russian oil workers. This is primarily due to the fact that while the flow rate of one well in Russia is about 9.5 tons of oil, this figure can range from 1 to 2 thousand tons in the KSA. Thus, there is also a need to mobilize significant resources for the conservation of Russian wells. A significant part of the base fields is quite old, with high water levels. Interruption in production will cause great technical difficulties and costs in the case of subsequent launch. The cost might be so large that resumption of production may be unprofitable for part of the fields.

The additional difficulty is that reducing production does not reduce the ongoing costs of maintaining infrastructure. This affects the profitability of the business greatly, if the company has to significantly reduce production.

A separate problem is how the reduction will be distributed among Russian companies. The struggle of lobbyists for the solution of this issue is already underway. The fate of small companies, which will be ordered to significantly reduce production, is particularly dramatic. At the same time, the legal mechanism allocating quotas for reductions has not yet been set up, as it may require amendments to the legislation by May 1, which is problematic in terms of time. However, a more prompt informal decision in the form of an urgent request from the authorities is also possible. However, regardless of the way quotas are allocated, the reduction will be very painful for the industry and the economy as a whole.

There is also a temptation to breach obligations. But in the conditions of market oversaturation, one can get a resumption of price war with the Saudis, and theoretically, the imposition of sanctions against imports and buyers of Russian oil. “The Nord Stream-2” case clearly showed that no large company would risk sanctions. It is easier to terminate the contract by referring to force majeure.

Another group of consequences of reduction in production is related to the fall in revenues from oil exports to the federal budget. Oil has traditionally earned up to 40% of revenues for the Russian budget, and cutting these earnings twice will be very substantial for the national economy. This is partly offset by the fall of the ruble (partly it has already taken place, but the potential for devaluation has not yet been exhausted). In addition, falling ruble will automatically cause imports to decrease. It will help to improve the trade balance, but it will not solve the problems of the budget deficit. In such a case, it is necessary to carry out a large-scale sequestration of the budget.

The fall of the ruble, the rise in prices of imported goods, and the loss of jobs due to the prolonged period of self-isolation for many Russians, fundamentally not referred to as quarantine in Russia, which does not allow the application of force majeure clauses in civil law, is already leading to increased unemployment. Unemployment statistics in Russia have traditionally been very poor. Due to the complexity of receiving the unemployment allowance and its small amount, many unemployed persons in Russia simply do not register their status. But if the “non-working period” is extended, we can expect the appearance of at least 7 million unemployed by mid-May this year (10% of economically active population of the Russian Federation, – Cepconsult note). It is noteworthy that they will be concentrated in large cities because the biggest impact of “non-working days” was placed on services, retail trade (except food) and transport, which are essential for metropolitan areas. And this, in turn, threatens to increase social tensions in the country. 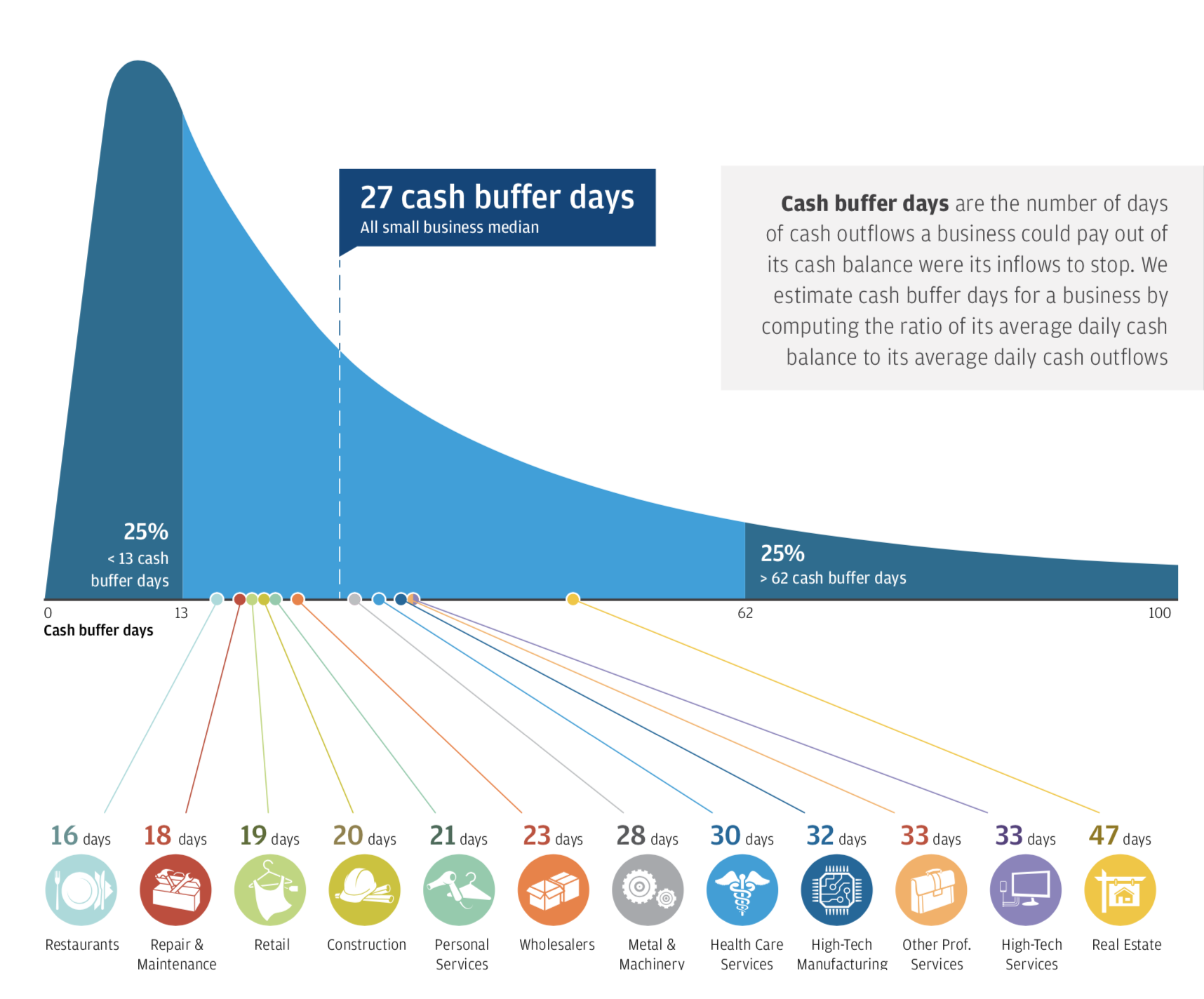 It should be noted that the Russian economy has not yet adapted to functioning in the new environment and there is almost no statistics – as it takes time to gather data (at least a month, and more reliably – a quarter). Many economic entities have not yet realized what awaits them. Many hope that “pseudo-quarantine” will be lifted and the situation will quickly normalize.

This is not true. A new, and very harsh reality is beginning for the Russian economy. The budget will have to be cut significantly and the national currency will have to be devalued. Citizens expect a significant drop in welfare, and business awaits reduction. With a certain probability, it will only be possible to estimate the dynamics and predict the scale of these processes after a few months, when representative statistics are accumulated.