Main trends of development of the world natural gas market

Following the «Global LNG Summit» which took place in the frames of international gas conference «Flame» during May 14-17, 2018 in Amsterdam, the Netherlands the evaluations of leading experts in the area regarding the main tendencies and further prospects of liquefied and piped gas market in Europe and the world were analyzed.

In particular, according to the opinion of the general secretary of the international analytical center «Cedigaz» (International Center for Natural Gas Information) G. Guro (Geoffroy Hureau), volumes of consumption at the global gas market in 2017 grew 3,3% and comprised 3640 billion of cubic meters. He mentioned that in the previous 5 years, the speed of gas consumption comprised only 1, 5 % per year. The highest speed of gas consumption at the market in 2017 took place in China and consisted 15% (or 30 billion cubic meters on top per year) which was caused by the governmental policies of China regarding reduction of coal consumption and replacement of it with gas. In the Near East states and Africa increase in the volumes of gas consumption amounted to 4, 8 % and 6, 7% accordingly. In Europe (including Turkey) the volumes of gas consumption in 2017 increased by 4, 8%. To the contrary, in the US this indicators reduced by 1, 4 % (Picture 1).

« Picture 1. Dynamics of volumes of gas consumption in different geographic zones of the world during 2015-2017 (billions of cubic meters) » 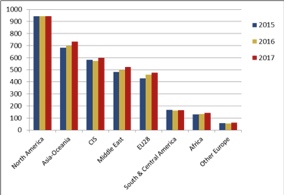 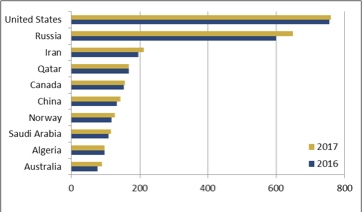 As G. Guro noted, 45,2% of all liquefied gas export came to consumers geographically placed in the Pacific region, 31,5% – to consumers from the Near East, 23,3% – to the states bordering the Atlantic Ocean.

As the consulting agency «Wood Mackenzie» vice president A. Walker said, the volumes of import of liquefied gas in Europe in 2017 raised by 19,5% (or 7,5 million tons).

To the point of further development of liquefied gas market in EU, A. Walker paid attention to the plans of the American team «Venture Global LNG» and other gas market actors’ desire to substantially increase the export volumes of American liquefied gas from Louisiana to EU.

According to the expert’s opinion, US and Russian Federation can become key prevailing suppliers of gas to EU.

The director of «Centrica Plc.» energy company Arturo Gallego Diaz noted that the percentage of use of installed liquefied gas facilities terminals in EU in 2017 comprised of approximately 20%. The exception was a Polish liquefied gas terminal where the indicator increased from 30% to 60% per year.

According to Arturo Gallego, in 2018 as a result of gas extraction reduction in the Netherlands and waters of the North Sea, it is expected that demand of American liquefied gas in Northern and Western Europe will increase. The expert believes that the supply of liquefied gas from the USA and piped gas from Russian Federation to EU will compete with each other and develop at the same time. Russian gas will further be supplied to EU under long-term contracts (up to 20 years) and American liquefied gas will be supplied in small quantities (1-2 million tons) under short-term and medium-term contracts.

The company plans to increase liquefied gas import from Quatar, the US and Norway. According to Pawel Jakubowski during 2019-2020 the power of Polish liquefied gas terminal in Swinoujscie will increase from 5 to 7 billion cubic meters per year. The volume of necessary investment for the expansion of project constitutes approximately 247, 2 billion US dollars. The tender for the selection of contractor has been planned at the end of fourth quarter of 2018. Liquefied gas terminal expansion project consists of 4 stages. Pawel Jakubowski noted that expansion of Liquefied gas terminal will be a part of the implementation of “North-South” gas corridor expansion and the terminal is to be the key element of gas hub formation in Poland.

Regarding prospects of gas cooperation progress between Poland and the US, «PGNiG» Polish executive director Piotr Woźniak noted that at this time in order to reduce the cost of gas, the opportunities of full logistics chain formation consisting investment of Polish companies into extraction of shale gas in the US, building of floating liquefied gas terminal for liquefaction of gas in the US and its transportation to Swinoujscie to the gas market of Poland are considered on behalf of Poland.

Besides that, attention shall be drawn to the initiative of Poland regarding the development of Polish companies of a full logistics chain of shale gas extraction in the US, its liquefaction and transportation to Poland. Such an approach of the project will prospectively allow to set the possible lowest cost of American gas in Poland.