Formation of the global market for greenhouse gases emissions permits

The Paris agreement signed by the representatives of 195 states of the world on December 12th, 2015 at the 21st Conference of the Parties of the UNFCCC within the United Nations Framework Convention on Climate Change which was called to substitute The Kyoto Protocol and enable prevention of global warming by means of obtaining resources from the international financial community.

The agreement is supported on behalf of the banking sector representatives, stock exchanges and investment forums. According to the assessment of Merrill Lynch, the Bank of America  analyst, at least 75 trillion USD will need to be spent  by 2040 in order to stop global warming  (this amount is in proportion to the  volumes of world GDP).

As estimated by the Organization for Economic Cooperation and  Development analysts (OECD), the expenses of necessary measures will compose of approximately 95 trillion USD.

The process of formation of mechanisms of accumulation of funds and evaluation of companies on non-financial risks is shown in the figure. 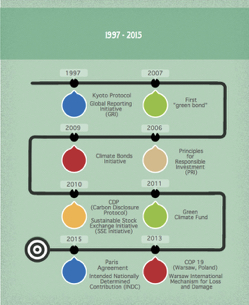 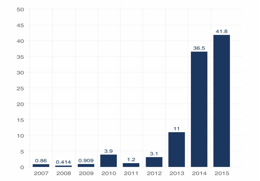 In 2007 The European Investment Bank issued the first “green bonds” (financial debt instruments with fixed income, which can be issued by   governments, commercial and international banks, corporations with a view to attract capital necessary for the formation of  asset (contribution) in  creation of low carbon economy), the incomes of which are aimed at implementation of  renewable energy and  energy efficiency projects.

The other initiative was launched in 2009 – Climate Bond Initiative, the participants of which managed the assets in the amount of 32 trillion USD in 2016.

The main objective of this initiative was to track the green bond market and accumulate fund in the amount of 100 trillion USD for the projects aimed at combat with climate change.

In 2009 during the United Nations Climate Change Conference COP15 in Copenhagen, Denmark, the idea of “Copenhagen Green Climate Fund” was discussed, the functioning of which was designed during the United Nations International Conference on Climate Change which was held in Cancún, Mexico in 2010. The main objective of the fund is to accumulate approximately 100 billion USD annually for the investment of these resources into projects on reduction of greenhouse gases emissions.

All governing bodies of the fund were established in 2022 during the United Nations Climate Change Conference (COP17) which was held in Durban, South Africa.

In 2010 the CDP (Carbon Disclosure Protocol) initiative was launched, the objective of which was to demonstrate information regarding the level of company’s implication in decisions on environmental issues and aid 822 institutional investors, who have assets of almost 96 trillion USD  in their management,  in disclosure of risks which their portfolios contain. A significant advantage of this initiative is the fact that it cooperates with both the representatives of corporate sector and municipalities and central authorities.

In the same year under the UNCTAD initiative (United Nations Conference on Trade And Development), UN Global Compact, UNEP FI (United Nations Environment Program – Finance Initiative) and PRI (Principles for Responsible Investment) Sustainable Stock Exchange Initiative (SSE) was established. This initiative was aimed at creation of a platform which could be helpful in explaining the way stock exchanges, investors, regulators and companies could promote improvement of transparency and results of corporate sector activity. It is primarily about compliance of company activity with the ESG – Environmental, Social and Governance   principles.

The importance of such events at the level of private financial sector is difficult to overestimate since the first initiative which was mentioned (UNEP FI) fostered implementation of modern financial instruments necessary for funding of projects on reduction of greenhouse gases emissions. The other initiative (SSE) made all key actors of the financial market restructure their commercial activity and take into account environmental and social risks – to reflect these risks in their reports in order to access formal stock exchange market.

Even more significant changes took place after the meeting of the signatories of the Kyoto Protocol within the frames of The United Nations Climate Change Conference, COP19 (held in November 2013, Warsaw, Poland) during which the UN member-states agreed to start working and intensify cooperation between a state and nongovernmental organizations in order to prepare so-called “intended nationally determined contributions” (INDC, article 4 of the UN Framework Convention on Climate Change).

In particular, the issuers were EDF (1,5 billion EUR, the sphere of real estate), Bank of America (500 million USD) and Vasakronan (1,3 billion SEK), which led to the development of the market.

In general, it can be stated that from this time the growth rate of this sector of the financial market was substantial – the market increased almost by 500% during 2013-2015.

On December 7th, 2015 during the United Nations Climate Change Conference, COP 21, the meeting of the representatives of financial market took place, namely, the leading stock exchanges companies (Euronext, NAsdaw, Luxembourg Stock Exchange), which discussed the mechanisms of collection of business information, assessment of results of corporations activity and financial institutions in the frames of combat with climate change.

An important aspect of the Paris Agreement on climate change is that member-states agreed to enable exchange of the results of measures applied with respect to reduction of greenhouse gases emissions at the international level (article 6 of the Agreement). In fact, this means a new global market which along with the obligations to reduce emissions creates necessary conditions for the procurement of capital for implementation of corresponding projects. Both the emission permits and the possibility of lending and investment into projects, aimed at the reduction of emissions, is in the field of interest of bankers.

In order to support the projects aimed at reduction of greenhouse gases emissions, the Paris Agreement on climate change foresees the mechanism which should foster reduction of greenhouse gases emissions and formation of conditions for sustainable development. The functioning of the mechanism is supervised by the certain body and will be aimed at promotion of participation of private companies in the projects on reduction of  CO2 around the world (article 6 of the Agreement).

The Paris Agreement on climate change member-states agreed unanimously to use all available financial instruments, and public funds above all (article 9 of the Agreement) in order to support the creation of  conditions necessary for the reduction of emissions and  monitoring,  reporting and verification as well, which is important given the investors take into account environmental and social risks.

The plans on reduction of greenhouse gases emissions prepared by the representatives of 175 states and obligations undertaken by the states to implement the mechanism of projects’ results transfer at the global level within the following decade (so-called ITMO –  Internationally transferred mitigation outcomes) enabling enforcement of  NDC  (Nationally determined contributions), are a significant result of the Paris Agreement on climate change.

Indeed, ITMO will be a price performance of the future global carbon market, where companies and financial institutions will be able to forecast demand and supply, implement their projects and attract funds necessary for such implementation.

Therefore, necessary institutional changes at the world financial market are coming to an end and financial institutions expect only formation of the global market of greenhouse gases emissions permits (namely, formation of corresponding national markets and market integrations according to the general rules of their operation).

Starting from 2020-2021 reinforcement of measures on decarbonization in the EU, the USA, Canada, the PRC, India, Brazil, Mexico and Australia is expected. These states are the biggest emitters of greenhouse gases and the biggest consumers of energy resources likewise.

Measures which are introduces at the global level are supported by the biggest investment organizations, which in the early 2000s started to withdraw their funds from oil and gas companies (including transnational) and invest them into projects connected to renewable energy. In such a way, in Germany the ban of operation of internal combustion engines from 2025 was adopted, which was supported by the management of financial institutions. A similar situation can be observed in Norway and other European states.

Regulations of greenhouse gases emissions is expected to come into force from 2027 at the global level. It is expected that the price of an emission permit per ton of CO2 from 2025 to 2030 will fluctuate from 30 to 120 USD (dependent on market conditions). The price of this financial instrument can be set higher than oil futures of different types. Introduction of the tool on reporting on CO2 emissions will cover different spheres of economy – agriculture, energy, extractive industries, chemical industry, steel industry, trade, etc.