Forecast of the European natural gas market according to Argus data

In the context of the gas supply crisis, Argus experts consider the following three scenarios in the short term:

optimistic – the transit of Russian gas continues both through Ukraine and Turkey with a total supply volume of 75 million cubic meters per day;

basic – only Turkish transit continues with a volume of up to 38.5 million cubic meters per day;

pessimistic – the supply of Russian gas through pipelines to Europe is completely stopped.

Thus, the role of Russian gas remains crucial when experts forecast the European gas balance and price indicators of the energy market in the short term. 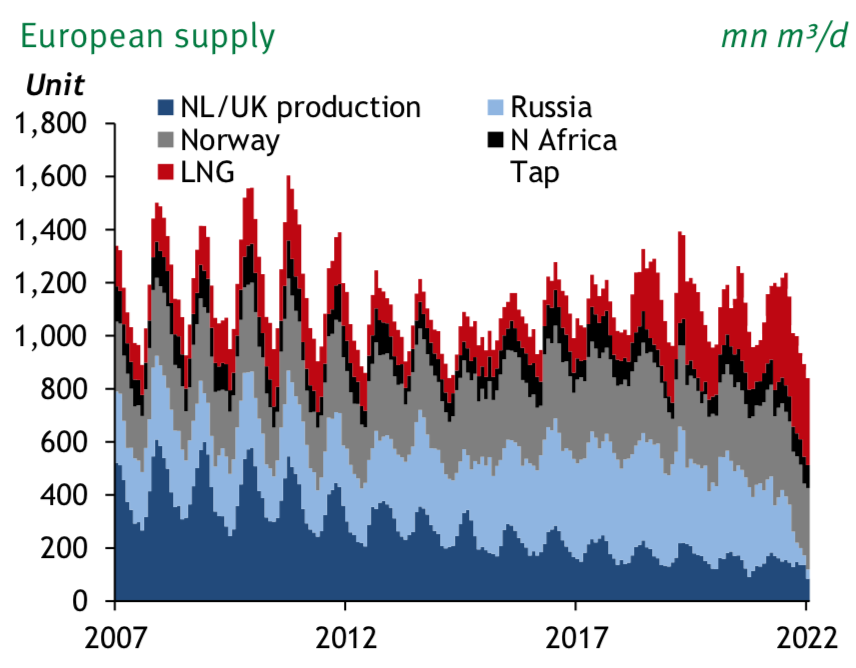 The main components of ensuring the gas balance of Europe and sources of supply of non-Russian gas to the European market are considered:

The expansion of production at new gas fields put into operation since 2019 (Martin Linge, Aerfugi Nord, Dvalin) can ensure an increase in annual gas production in 2022-2023 by 1.5 billion cubic meters, compared to the previous period.

The level of output production capacity will be influenced by the ability of Europe’s gas transport infrastructure to receive and deliver prospective volumes of gas to consumers. Thus, the reconfiguration of European gas networks in order to allow LNG to compensate for most of the shortfall in Russian gas has created infrastructure bottlenecks during II-III 2022, which are likely to persist during part of the winter period, particularly during low demand in the UK. Expanding LNG import capacity in continental Europe could reduce the UK’s role as a transit market, which in turn would allow more Norwegian supplies to be directed to the British Isles.

The implementation of the Dutch government’s plan to decommission the Groningen gas field in 2023 is accompanied by a minimization of production, which leads to a decrease in the total volumes of winter production in 2022-2023 to 5.4 bcm, which is 3 bcm below the level of production in winter 2021-2022. In case of intensification of production at other small deposits, within 2-3 years, the Dutch resource of winter gas supply has the potential to grow up to 6.8 bcm.

European pipeline gas imports from North Africa are set to increase during the winter period of 2022-2023. The Algerian state-owned company Sonatrach plans to achieve annual gas supplies through the TRANSMED pipeline to Italy (interstate Mazara del Vallo junction) at 16.3 bcm (11 bcm in 2021) or 71.6 million cubic m per day. Despite the fact that the capacity of TRANSMED reaches 103.7 million cubic meters per day, the operator of the Italian GTS company Snam does not increase the flow of African gas, giving priority to the maximum use of the Azerbaijani resource, which comes through the TAP gas pipeline to the MTZ San Foca Melendugno with an average daily volume of 28 million cubic meters.

According to the results of the winter period of 2022-2023, European measures to reduce the consumption of natural gas in the sector of combined electricity and heat production may not be effective.

The total demand for gas in the energy sector in the six largest gas-consuming countries in Europe – Germany, Great Britain, Italy, the Netherlands, France and Spain – is growing year-on-year due to restrictions in the supply of other types of fuel and high operating margins of operators of gas-fired power plants. According to the results of III-2022, the total gas generation was 52.72 GW, compared to 41.11 GW a year earlier.

In contrast, the independent reduction of gas consumption in industry during 2022, primarily by enterprises producing steel, aluminum, fertilizers (ammonia), leads to a general reduction in European gas demand in the amount of up to 15 bcm.

Evaluating the reserves of natural gas in underground storages (PSG) on the territory of Europe (as of October 2022 at the level of 93.6 bcm), experts, in accordance with the scenario of no supply of Russian gas, forecast the following options for the market balance of demand and supply during the winter period of 2022-2023 year:

Therefore, the role of Russian gas remains crucial when experts forecast the European gas balance and price indicators of the energy market in the short term. 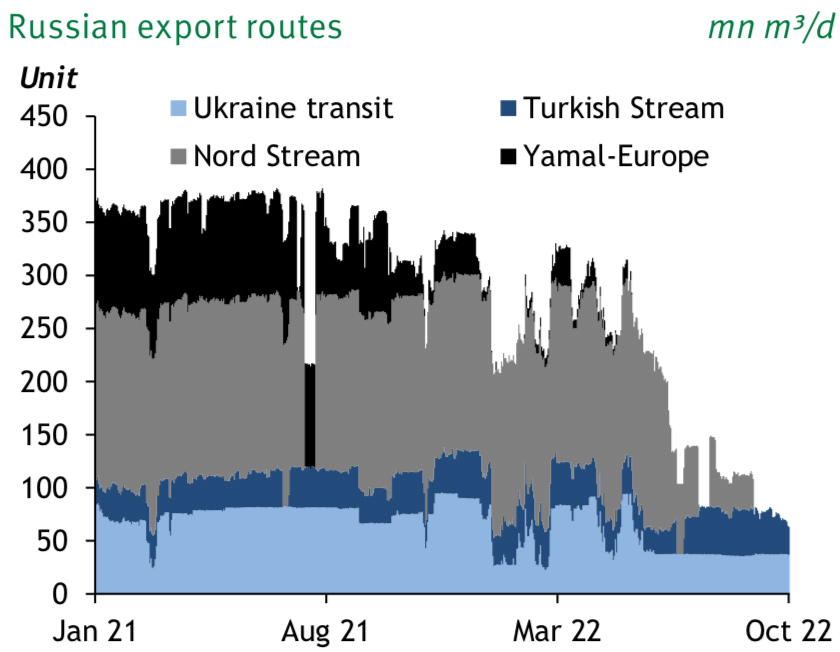 Ensuring Europe’s gas balance during the winter period of 2022-2023 due to domestic production and available external sources of non-Russian gas supply is possible in case of a mild or moderate winter.

In the event of a pessimistic scenario of a complete cessation of the supply of Russian gas through pipelines to Europe and a cold winter the shortage of energy resources on the European market may reach 10 bcm of gas.