The Slovak economy is showing potential for recovery

At present, the automotive industry remains the key “driver” of the Slovak Republic’s economy, which, in the setting of the crisis, causes a rapid deterioration of macroeconomic indicators, and in the case of stabilization of foreign demand and production conditions – a sharp growth of the Slovak economy.

As of 2020, the share of foreign trade in GDP grew to 85.7%. The share of the automotive industry in Slovak industry reaches 50% and directly generates 14% of GDP. There are 6 car plants in the country, including 3 Volkswagen plants, Kia Motors plant, Stellantis N.V. plant, Jaguar Land Rover plant.

In June 2021, the Slovak industry offset the decline caused by the 2020 COVID-19 pandemic. Industrial production in Slovakia in June 2021 increased by 13.7% as compared to the same period last year and exceeded the level of production in June 2019 by 4.1%.

The annual increase in industrial production is mainly due to the production of metals and metal structures (the industry grew by 40.3%), machinery and equipment (by 23.5%), rubber and plastic products (by 18.5%). These three industries reached in June 2021 significantly higher rates than before the pandemic (June 2019); the most significant growth occurred in metal production (13% higher than two years ago). Vehicles production, which is key for Slovakia in June this year approached the values ​​before the pandemic (currently the figures lag behind by less than 3%); production is growing steadily for the fifth month in a row. As of now, only five of the 15 industries have not reached production rates of June 2019.

The largest leeway among the industries of the Slovak Republic, as compared to June 2019, shows the production of textiles and clothing, which decreased by 25%. The challenging industry, in the conditions of economic recession and pandemic of COVID-19 disease, is also the production of oil products, which in the Slovak Republic decreased by 17.7% according to the results of 2020.

According to the results of the first half of 2021 industrial production of the Slovak Republic increased by 19.3%. The largest growth occurred in the following industries: vehicles (by 30.3%), metals and metal structures (by 25.8%), machinery and equipment (by 27.2%), electricity and natural gas supply (by 14.4%), rubber and plastic products (by 16.1%). For the first 6 months of 2021 production of petroleum products decreased by 9.3% as compared to 2020.

In accordance with the improvement of the situation in industry and foreign markets, in June 2021 exports of the vast majority of groups of Slovak goods reached higher levels than before the pandemic (June 2019).

Total exports of goods from Slovakia in June 2021 reached EUR 7.7 billion, with the annual increase of 16.6%. Total imports of goods to the country also increased by 28.3%, up to EUR 7.4 billion. Thus, exports exceeded biennial figures by 19%, and imports exceeded by 18.7%. The active foreign trade balance of the Slovak Republic, as of June 2021, has traditionally been ensured by car exports (64% of total exports). Exports to EU member-states accounted for almost 80% of total volumes. Balance of foreign trade with EU countries in June 2021 slightly worsened as compared to the same period of last year, but exports still exceeded imports by EUR 1 billion. Of the ten classes in the structure of exports, 8 showed an increase compared to the figures of last year, and 9 had higher values ​​than before the pandemic (June 2019).

According to our experts, the high performance of the Slovak industry in 2021 is primarily due to significant fluctuations in production results in certain sectors in 2020 under the influence of anti-epidemiological measures aimed to limit business activity. The year-round results of the Slovak economy, dependent on export earnings in the field of industrial production, especially in the automotive industry, given the low rate of vaccination (41%), can be significantly adjusted by the negative impact of autumn-winter exacerbation of COVID-19. The pace of economic recovery will be connected to the level of demand for products of local car manufacturers in Slovakia’s main trading partners – Germany, the Czech Republic, France and Poland.

According to our estimates, the most profitable business in the Slovak Republic is the transportation and distribution of energy (natural gas, electricity), car production and telecommunications services. 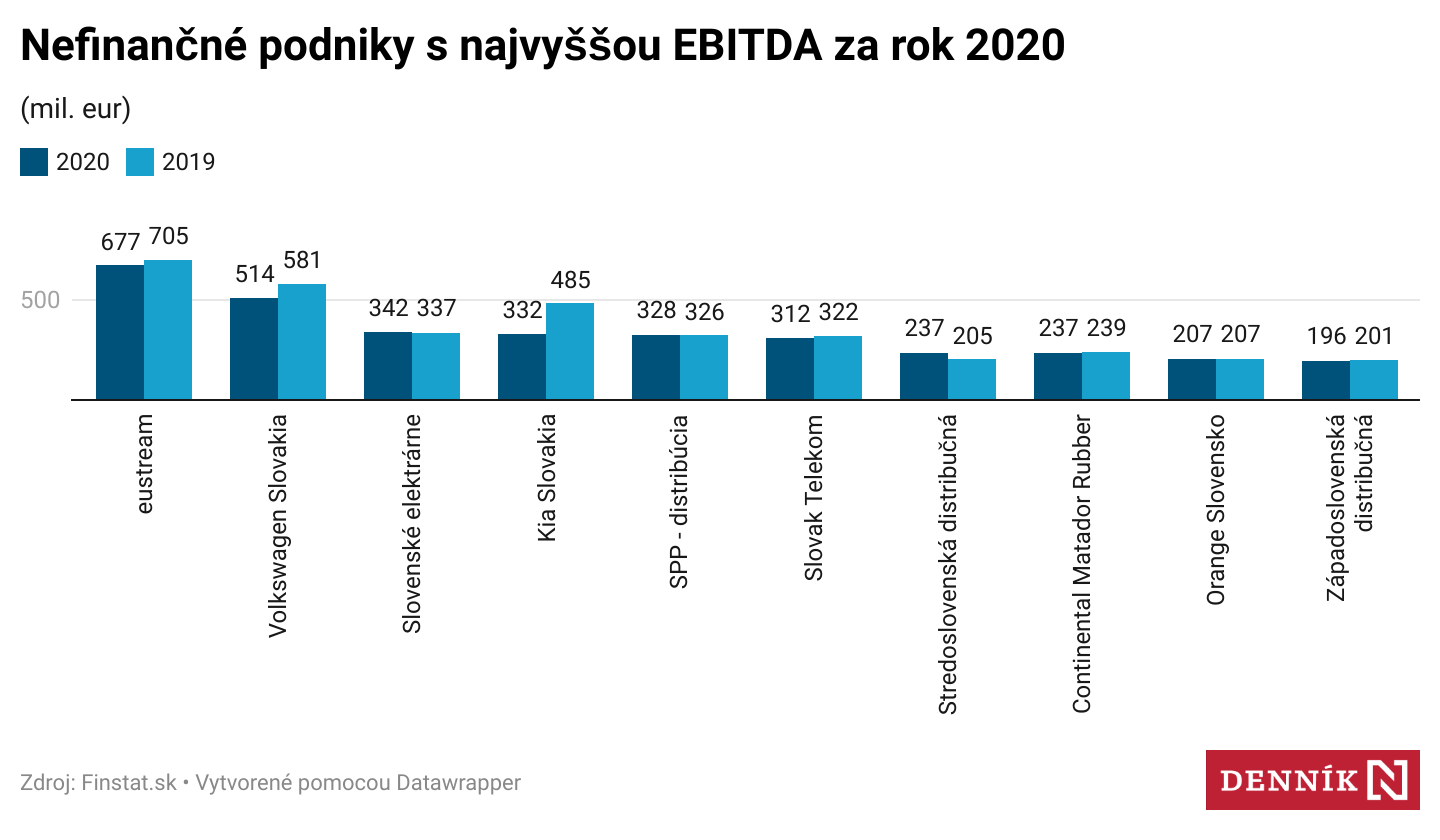 Enterprises of the real sector of the Slovak economy with the highest EBITDA for 2020, million euros

Among the leaders of the real sector of the Slovak economy in terms of EBITDA (Earnings before Interest, Taxes, Depreciation and Amortization, an analytical indicator equal to the profit before interest, taxes and depreciation) companies with foreign capital and management control are dominating.

According to the results of the first half of 2021, the small, open Slovak economy demonstrates the potential to recover and achieve the pre-crisis (2019) level of industrial production in the short term. At the same time, the positive dynamics of Slovak Republic’s export revenues in the field of industrial production, primarily automotive, will depend on the epidemiological situation in the country during the autumn-winter exacerbation of COVID-19 and demand for Slovak products in EU foreign markets. A threatening factor in the development of the economic situation in the country remains a significant dependence of the main enterprises of real sector of economy on foreign capital.