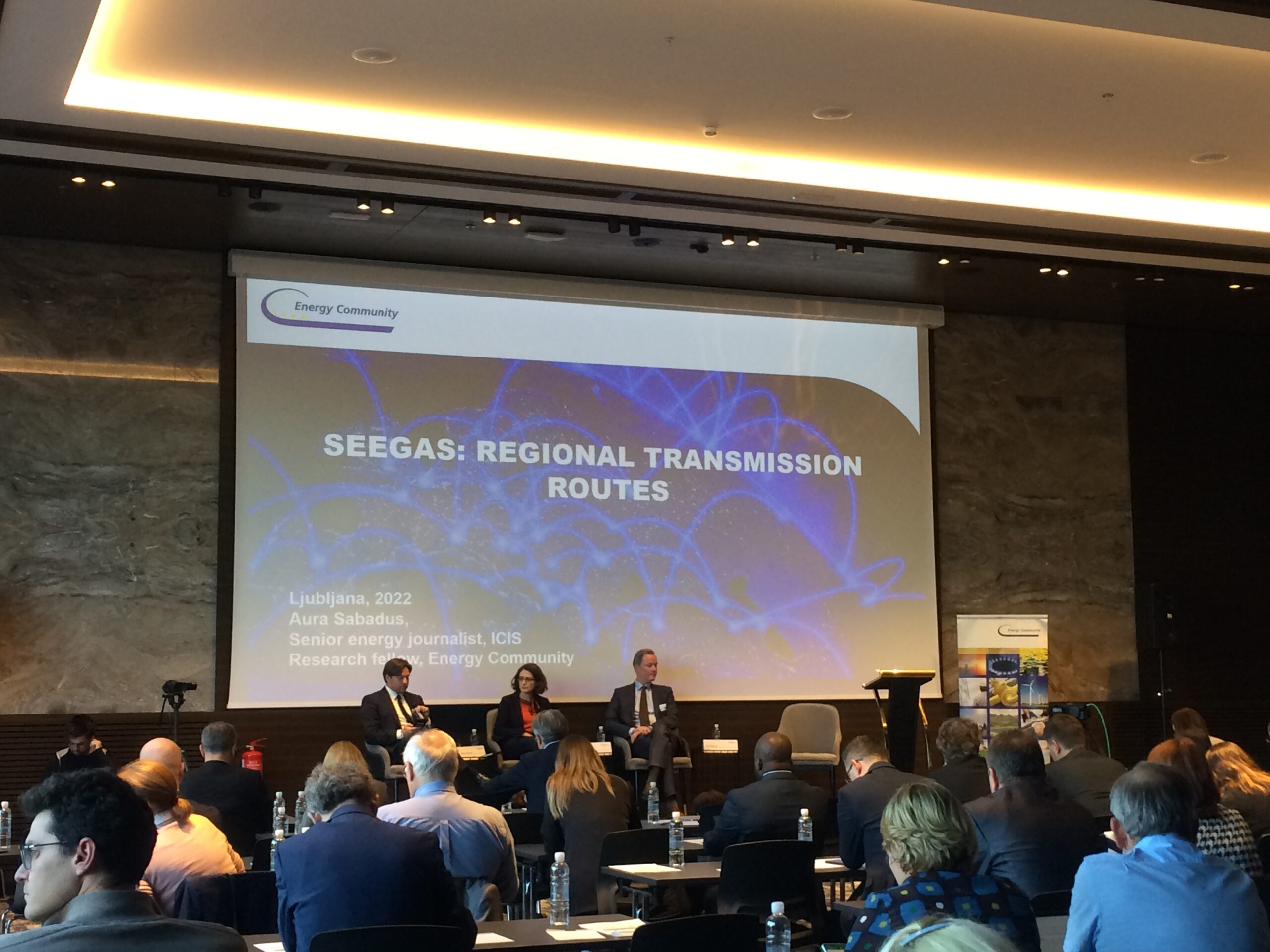 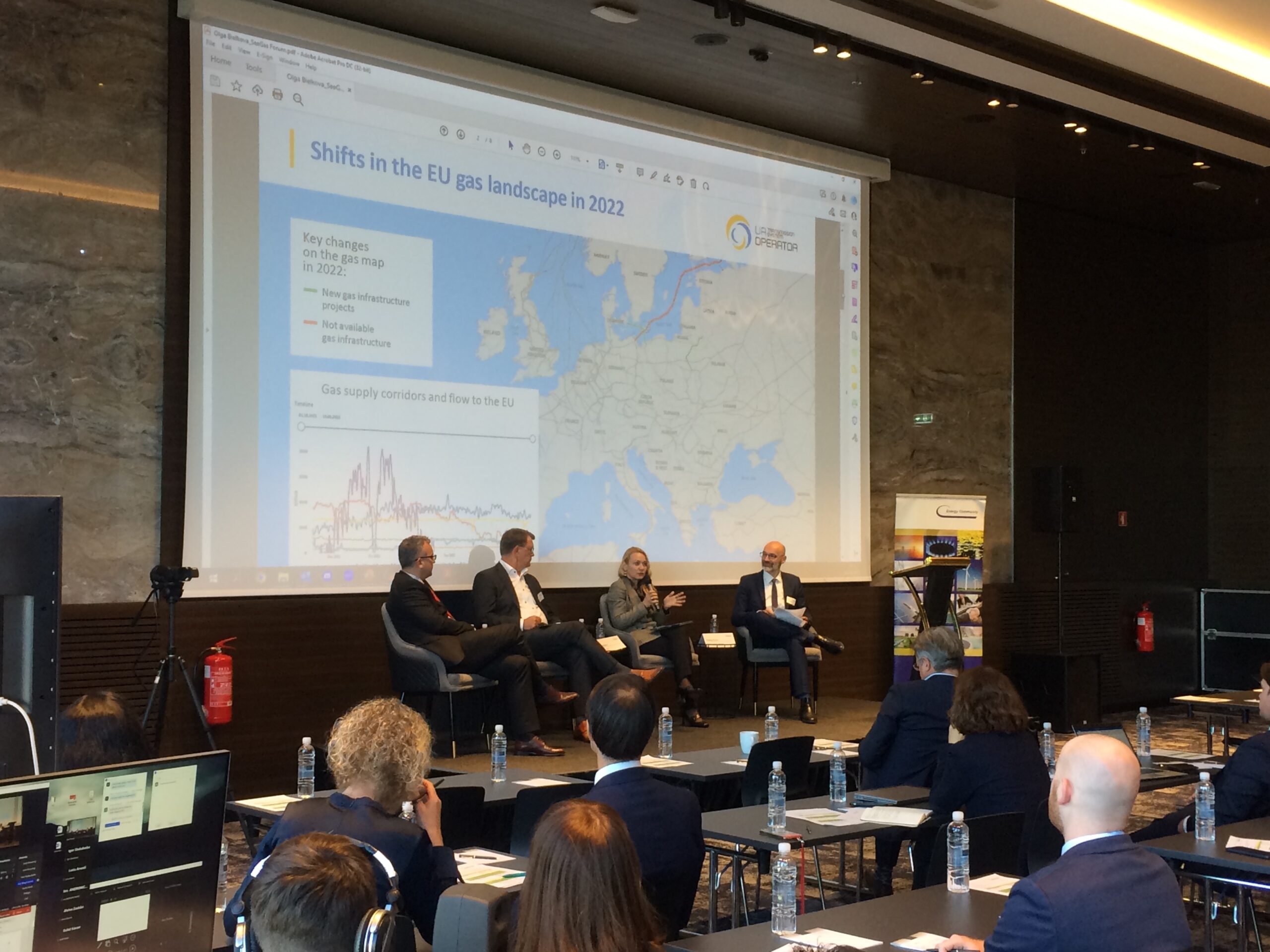 The main topic of the international event of the Energy Community – “17th  Gas Forum”, which took place on October 4-5, 2022 in Ljubljana, Slovenia, was the rebalancing of the European natural gas market in the post-Russian period.

The most important conclusions we made based on the results of participation in professional discussions are the following:

1) The complete cessation of the supply of Russian gas in the interests of European countries is taken into account as a factor in the functioning of the European gas market already in the short term, given the unreliability of the Russian Federation as a supplier and the aggressiveness of it’s energy policy;

2) Within the framework of such a scenario, during the winter period of 2022-2023, it is envisaged that the transit of Russian gas through the territory of Ukraine will be stopped, as the final element of the current stage of the Kremlin’s pressure campaign on the EU in the energy sphere;

3) It is expected that within the medium-term period until 2027, during which the complete withdrawal of EU member states from the consumption of Russian gas is expected, the winter season of 2023-2024 will be the most difficult and only after its passage will happen the gradual stabilization of European gas markets, normalization of prices, balancing supply/demand.

Currently, the share of Russian gas consumption in the EU has decreased from 40 to 8%. The forecast of a decrease in the overall level of demand for natural gas in the EU (from the level of 520 bcm in 2021) ranges from 340 to 260 bcm by 2040, depending on the degree of implementation of the “Fit for 55” and “RePowerEU” programs, respectively.

According to the assessment of the participants of the conference, the termination of the Russian gas transit through Ukraine and the lack of its supplies during 2023 will lead to a shortage of 12 to 19% of this energy resource in the EU (from the average level of consumption in 2017-2021 of 520 bcm). Experts draw attention to the fact that it is about the level of deficit that cannot be compensated by available supplies from other sources, including the global LNG market. It is assumed that during 2023 the gas balance will be reduced due to the limitation of gas consumption in industry, and in the following years the deficit may be leveled by a decrease in the overall level of the EU’s need for this energy resource. 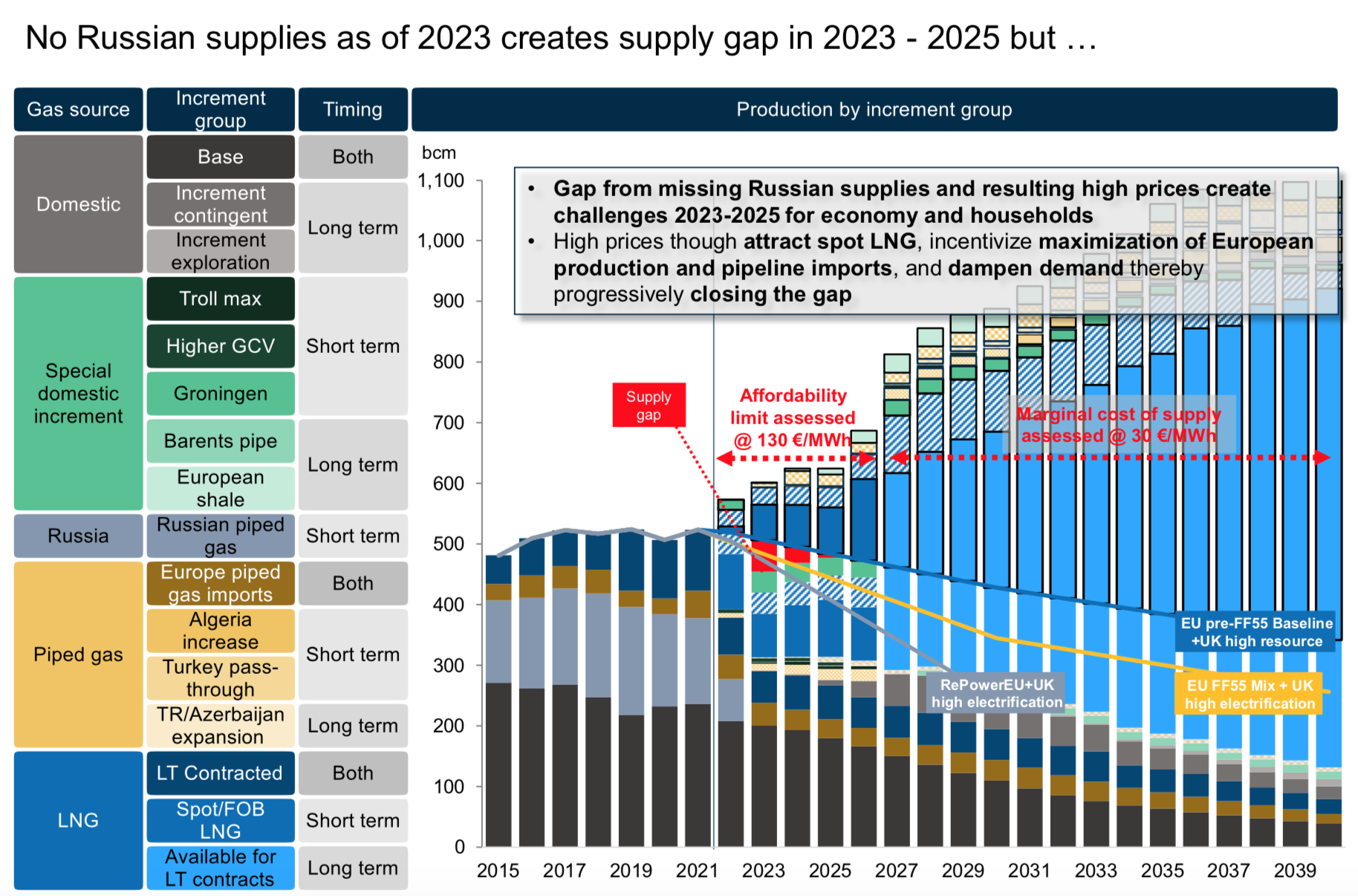 Experts note that in the short term there is no possibility to completely replace the import of Russian gas in the EU. European gas prices, which are growing in conditions of shortage, effectively attract LNG cargoes to the market, contribute to the intensification of European gas production and maximize pipeline imports from neighboring sources.

In the medium-term period, starting from 2027, long-term contracts for the supply of LNG and the implementation of relevant infrastructure projects will act as a key alternative to Russian pipeline supplies and the main source of rebalancing the European gas market. In these conditions, creating favorable regulatory conditions for investing in the gas sector (including shale gas production) at the EU level and ensuring timely management decisions can shorten the difficult period of transformation of the industry and prevent the loss of the potential of the European industrial base. 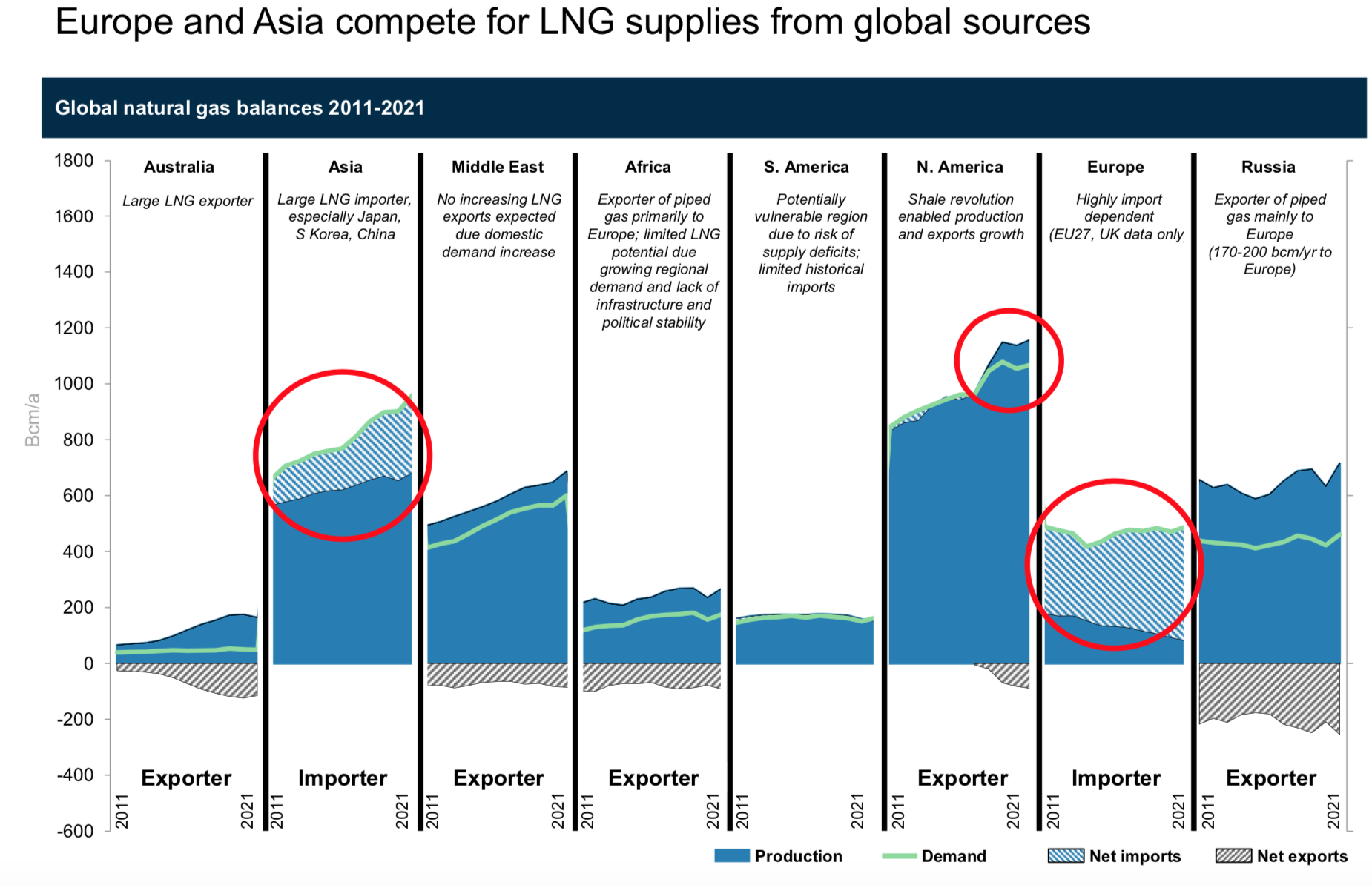 In the course of rebalancing the European gas market and moving away from the import of Russian gas, in the short term, the regionalization of gas markets, caused by infrastructural features, is an influential factor.

According to experts, in the “post-Russian period” the shortage of energy resources will be unevenly distributed among such regions as: Northern and Central Europe, Southeastern Europe, Italy, the Iberian Peninsula, the British Isles, and the Baltic States. Infrastructure bottlenecks that need to be solved are, first of all, the limited gas transportation capacities between Spain-France, Poland-Baltic, and the lack of the possibility of a reversal from Italy to Greece. In the conditions of a gas deficit in the EU at the level of 12% (from 53 bcm/y), intra-European competition for available resources is expected between such regions as Northern and Central Europe (a deficit of 40 bcm), South-Eastern Europe ( deficit of 11 bcm) and Italy (deficit of 2 bcm). 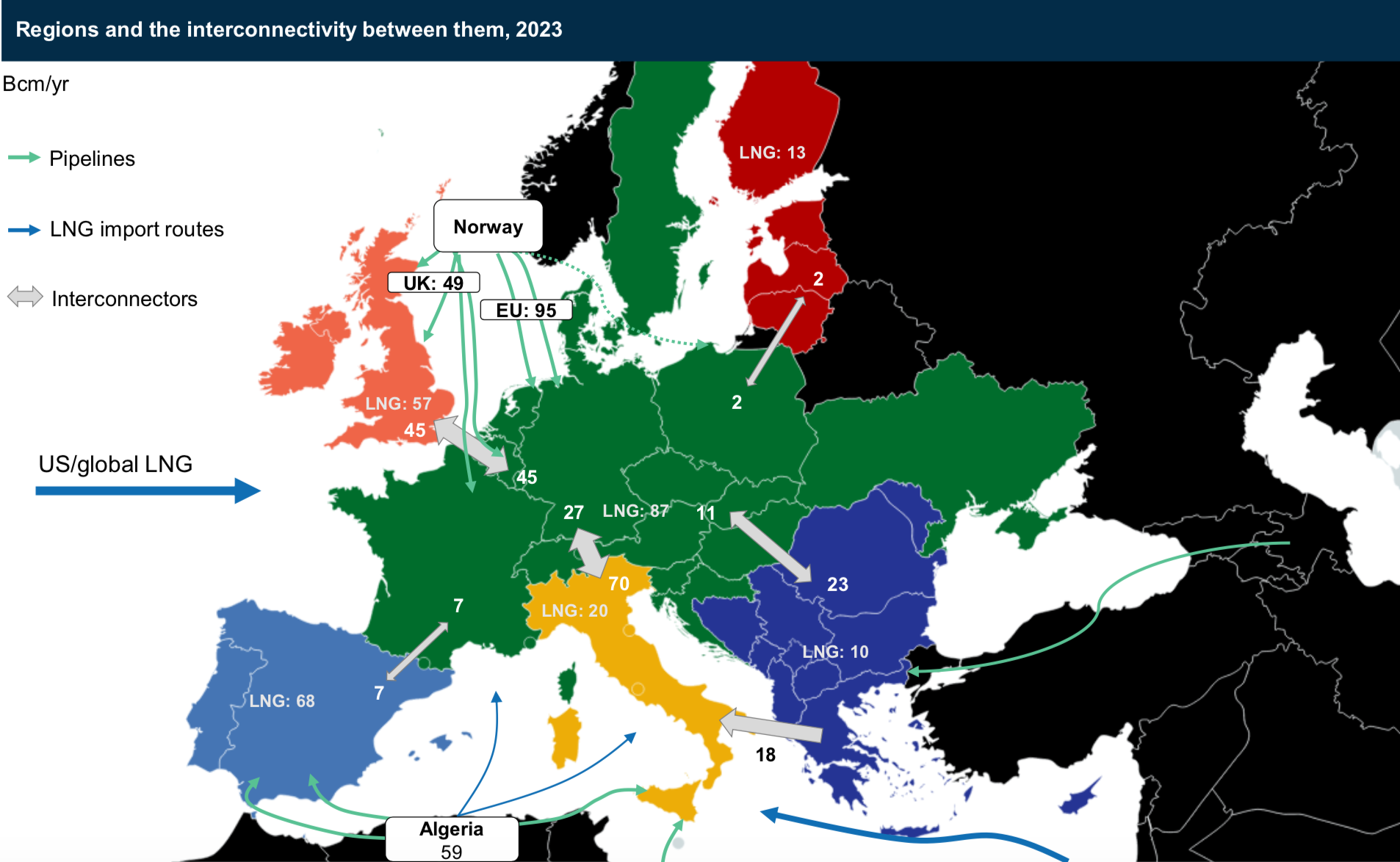 Analyzing the regional features of the European gas market and the prospects of rebalancing the gas supply without Russian gas, the event participants draw attention to the fact that the period of low gas prices has ended for the countries of Central and Eastern Europe, as well as the Baltic States. Compared to 2021, these regions experienced a critical increase in gas prices (+€290 per MWh), unlike the countries of Western Europe (+€2 per MWh) and the Balkans (+€15 per MWh). The “westernization” of the large European gas market is taking place, which will lead to the final integration of the national gas markets of the CEE countries in terms of prices, infrastructure, regulations and a departure from the exploitation model of “long-term contracts with Gazprom”.

According to our assessment, the process of rebalancing the European natural gas market is taking place in response to the aggressive energy policy of the Russian Federation. In the short term, the complete cessation of the supply of Russian gas in the interests of European countries and, in particular, the disruption of transit through the territory of Ukraine, is considered a factor in the functioning of the European gas market.

Representatives of EU government institutions and managers of leading gas industry companies take into account that in the short term there is no possibility to completely replace the import of Russian gas, and the lack of energy resources during 2023 may lead to significant negative consequences for the European industry.

In the medium-term period, the transformation of the European gas market will be characterized by the elimination of regional differences, orientation towards the global LNG market, and the introduction of regulatory mechanisms favorable to domestic investments.