On April 2, 2019, the US Energy Information Administration (EIA) representative, Michael Mobilia, said that during March 2019, when prices for liquefied gas in China and other Asian markets fell to a historically low level, the countries of the European Union became the main export market for American LNG.

According to M. Mobilia, the United States will continue to increase LNG supplies to Europe and confidently compete with Russia to increase its own share at the EU gas market.

Wood Mackenzie consulting agency supported the position of M. Mobilia. “Given that in the US, by the end of 2019, LNG production has to double to 40 million tons per year (or about 55 billion cubic meters of gas per year), an increase in the supply of US LNG to the EU will continue to occur”.

Analysts of the US Center on Global Energy Policy at the Columbia University, Jason Bordoff and Trevor Houser, believe that with the growth of LNG supplies from the US, gas prices in the EU may drop and the price of spot gas in the EU will significantly get closer to the price of gas under long-term contracts where the pricing formula is based on the index of oil prices. Thus, according to T. Houser, Russian Gazprom, which had previously refused to negotiate revision of existing long-term gas deals, revised almost all contracts with European gas importers by changing the formula for gas prices and by entering into contracts the index of gas prices for European gas hubs.

According to Dimitrios Mezartasoglou, the expert of “The Institute of Energy for South East Europe”, the Greek think tank, an increase in the supply of liquefied natural gas from the US strengthens the negotiating position of European importers with “Gazprom”. The presence of American gas in Europe helps to create a more diversified and competitive gas market in the EU.

In addition, on March 29, 2019, “Gazprom” and “RosGazDobych” announced the start of a project to build a new LNG terminal with the capacity of 10 million tons per year (or about 13.6 billion cubic meters of gas per year) in the Gulf of Finland near the city of Ust-Luga. The products of this terminal are designed to compete with the US liquefied natural gas in the EU market.

Consequently, within the next few years, competition between the US and Russia for the EU gas market will continue to grow and become more intense. Despite the prospects for increasing LNG imports from the US to the EU, and an increase in the proportion of the US liquefied natural gas in Europe, the EU will continue to remain significantly dependent on deliveries of Russian pipeline gas. Taking into account the tendency to increase the share of LNG in the EU gas balance, Russia will try to strengthen its position in the European market of liquefied gas, in particular by constructing new LNG terminals in the Baltic Sea area. 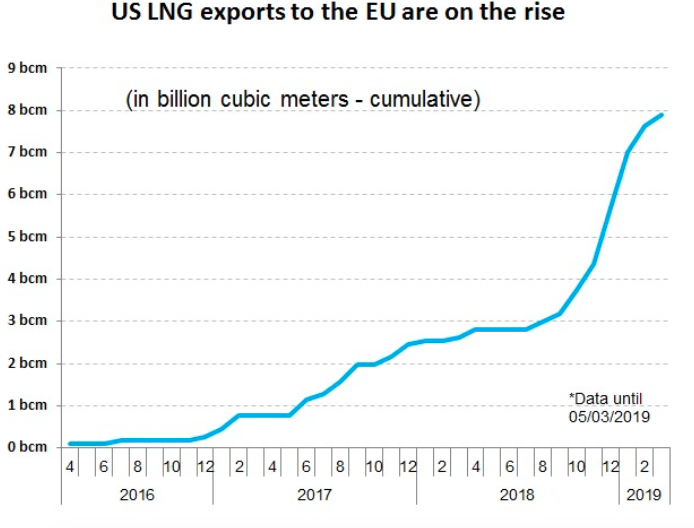