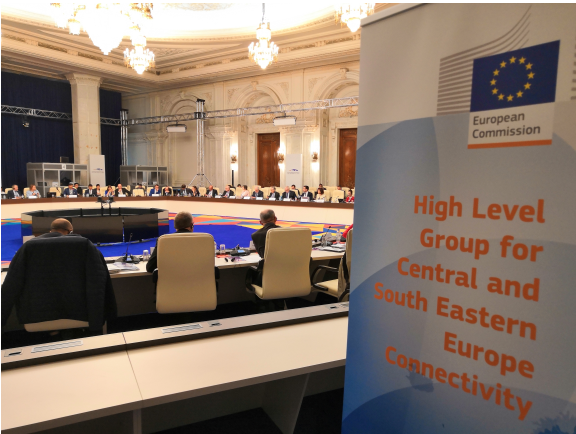 On April 1, 2019, a regular meeting of the Central and South Eastern Europe Energy Connectivity (CESEC) was held in Bucharest, Romania.

CESEC is working on acceleration of the integration of the Central-East and South-East European gas and electricity markets and has adopted a number of important decisions that will determine the direction of development and financial support from the EU for further expansion of relations between the countries of the region.

The following important decisions were approved at the CESEC meeting:

-the report on the completion of construction of the first high-voltage direct current (HVDC) electric submarine interconnector line between Italy and Montenegro, which is scheduled to be commissioned by the end of 2019. It was noted that one of the prerequisites for doubling the capacity between Italy and Montenegro would be the Trans-Balkan Energy Corridor, in particular its sites in Serbia, and the need of further cooperation of the interested parties to conduct an analysis of economic efficiency and  remove potential barriers;

-the plans for the creation of an integrated regional electricity market, including, inter alia, the further development of interconnectors between Hungary and Slovakia and the implementation of the SINCRO.GRID intelligent network project between Slovenia and Croatia;

– the decision on the implementation of the Black Sea Corridor project, which integrates renewable energy facilities on the Black Sea coast with the CESEC region;

-the beginning of the project on elimination of the bottleneck between Ukraine and Slovakia due to increased capacity of the Mukachevo-Kapushany power line;

– the updated action plan in the field of electric power industry and a proposal for the interested parties to implement all its items as priority measures;

– the appeal to all EU member states and Energy Community members to establish or improve mechanisms for transboundary electricity flows in the region and to remove regulatory barriers hampering consolidation of national markets;

– the appeal to operators of the transmission systems of Greece, Romania and Bulgaria on the appointment of a regional security coordinator in accordance with the principles of the instructions on operating of the system;

– the decision on the need to accelerate the implementation of the merger of electricity markets of the EU member states and Energy Community participants in accordance with the updated CESEC Energy Action Plan.

The willingness to realize the enormous renewable energy potential of the CESEC region (which is currently estimated at 130 GW) especially for wind and solar power plants has been specifically discussed and confirmed.

Consequently, the CESEC decision has become one of the important steps towards the creation of a regional electricity market in Central and Southeast Europe. The group has confirmed its ability to facilitate the implementation of energy projects through grant support from the “Connecting Europe Facility” program.